The 3rd Annual Bradenton Area River Regatta was a huge success! After having cold and rainy weather in its 2nd year, this year went off without a hitch, and it has been reported that there were about 100,000 people in attendance!

I was looking forward to this for weeks, and was so happy when the day turned out beautiful! I had guests so I didn’t get to make it there as early as I would have liked. (Clydesdales are my favorite, and I had hoped to see them cross the “Green Bridge”)

We got there for the 2pm Powerboat Division Final. Parking was a bit of a challenge, but that was to be expected. There were so many people! On the walk to the river, we passed a concert, there weren’t many people listening, probably because the big event was about to happen. 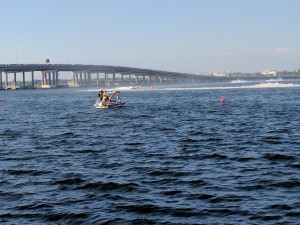 We actually found the perfect spot, right between both bridges, and right on the rail, which we didn’t think would happen. We were right in front of the pavilion, where soon after we got there, a BMX bike show was going on. There were literally people everywhere. The whole length of the bridge was lined with people, the waterfront was full, and people were way up on the embankment too.

The show didn’t start at 2, but that was fine. There was plenty of action on the other side of the bridge. We couldn’t see from where we were, but it was the Hydro Cross Qualifier’s. We did have a little entertainment though; a wake boarder came out on a jet ski. He was pretty incredible! There were also a few helicopters. Had I thoroughly read about the Regatta prior to getting there, I would have known that there were helicopter rides too! They were flying so low, and came right above the crowd so we could wave at the passengers, it was quite fun.

When the power boats finally came out, the crowd was filled with excitement! Check out this video below!

Boy those things are loud. Honestly, I was expecting something like a big cigarette boat, but realistically, they wouldn’t have even fit in that small area. Of course, I picked my favorite, a purple boat to win, but a white one and a yellow one were the leaders. Those little boats move fast! They were almost running in a figure 8, and I believe the white boat lapped the others. 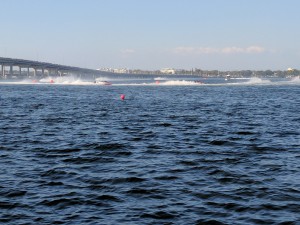 Since it didn’t get under way on time, and one of the boats broke down stopping the action again, we left. So we didn’t see who won, but it was a lot of fun while we were there. As I said before, I had company, and if it were up to me, I would have stayed all day! There’s always next year.