Don’t Be a So-and-So

Have you ever received an alert from Facebook that “so-and-so tagged a photo of you”?  This notification can probably elicit a wide range of emotions when it comes in.  Panic if you just had an especially wild weekend and you can’t remember all the details.  Or perhaps impatience if it shows up from someone you don’t know and you suspect you’re being spammed. 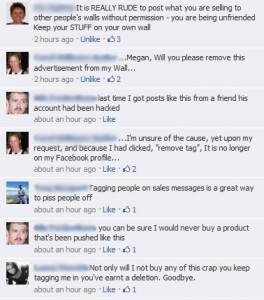 I was going about my morning routine earlier this week and my phone buzzed with a Facebook notification.  I picked up my Android and it said, “So-and-so tagged a photo of you”.  Problem was, I didn’t know so-and-so and it was 6 o’clock in the morning–who would be tagging me at 6AM?  I had a feeling I was going to see a lame attempt at getting me to look at something I wasn’t really interested in when I clicked to look at the photo.  My suspicions were justified, it was someone hawking their products and they were tagging a bunch of people on their product photos.

In the short time it took me to look at the photo and go to so-and-so’s Facebook page, there were already a string of angry comments streaming in.  While some of the language was colorful (click picture at right), the theme of the comments was that people were un-following this page.  In droves.

Using these underhanded tactics to try to get people to look at your products doesn’t work.  It polarizes your audience and gives you a bad reputation.  My advice for the day: Don’t be a so-and-so and Market Responsibly!!