And Credit to Customers 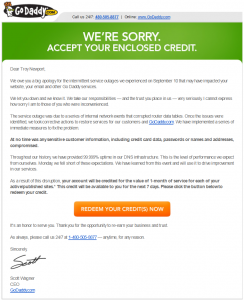 accounts.  Within an hour of the problems GoDaddy experienced on Monday, competitors such as HostGator were tweeting with relevant hash tags (e.g., #TangoDown) trying to lure angry customers away.  GoDaddy’s official explanation of the outage is that it was a technical issue, not a result of hacking as was the early social media rumor.

We all know that no company is perfect, and when it comes to technology we rely on, it can be incredibly frustrating when a massive techno-failure occurs.  How a company responds during and after such an event often defines how they are viewed by their current customers and the public at large.  I’m not sure how many customers GoDaddy lost as a result of Monday’s outage, but as a customer I certainly appreciated the account credit that arrived in my inbox this morning.

You can click the screenshot at right to read the GoDaddy apology letter.

Dr. Gino J. Sedillo, M.D. has led an interesting and storied life.  He wasn’t born a cardiologist after all.  In fact, his first job in a hospital was buffing floors.  Within two years he moved up to orderly, emptying bedpans and making beds.  He met a cardiologist at that hospital who became his inspiration, and…

Beware of “URGENT Brand Confirmation” Emails I receive about one call or email a month from one of our clients who see this scam email and worry that it may be legitimate.  I received an email this morning from a client and just happened to have one of these sitting in my spam folder too…

New Location Update You are likely aware we have been in the process of getting our new home ready to move in.  The journey has been a long and interesting one!  But our new location is in place and the build-out will be complete for an early June move-in. You can begin sending mail to…

The Bridge Street Merchants Association presents Three Events In One:  Holiday Open House Walk About, Christmas on Bridge Street and The Cortez Yacht Club Lighted Boat Parade Bridge Street will be changed from its normal tropical paradise into a Winter Wonderland on Saturday, December 17.  Snow flakes, a visit by Santa and Mrs. Claus, holiday…

I was taking a poll the other day and one of the questions asked: “Do you enjoy the trip more, or the destination?” The question struck a chord with me, probably because of introspection I’ve started doing over the past few years as I (gasp) get older.  I find myself more often thinking about decisions…

L.Mae Boutique is a new online store designed to feature the best of modern women’s fashion.  Located in Charleston, SC, L.Mae initially used Payvment to sell their clothes online to gather some exposure for their products.  However they became aware they needed a full web presence to be effective and competitive online.   The website design…