One of the earliest pieces of advice I was given by a Human Resources Director when I first entered the workforce (more years ago than I care to admit to) was to be careful with humor.  “Leave it to the professionals”, I was told.  “You’ll end up making the wrong joke at the wrong time and it will land you in hot water.”  I can say with full certitude that I have ignored the hell out of that advice over the years.  It’s just not my personality.  For the most part, with a little common sense, I have avoided the ominous outcomes the HR Director warned me about.  (I readily admit I have made a lot of bad jokes over the years though.) 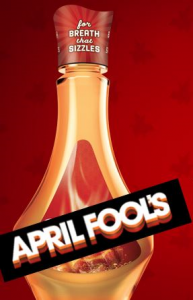 Humor is not only risky in the workplace, but it can also be a risk to your brand.  Not everyone has the same sense of humor.  (Heck some people don’t have a sense of humor at all!)  Social media can make something you say take off like wildfire, so you have to be especially calculated if you’re going to pull a prank on your loyal customers.  When April Fools Day rolls around, it’s always interesting to see if major brands play it safe or bold.  For the most part there don’t seem to be any kerfuffles this year so we may conclude everyone played it safe?

One of the interesting (albeit minor) backlashes we’ve seen involves Scope.  They announced they are launching a new bacon-flavored mouthwash as a prank on their followers.  Interestingly when some people realized it was a joke they actually expressed disappointment that it wasn’t a real product!  Who knows what the future holds for bacon-flavored Scope.  Perhaps what started as a simple April Fools joke with turn into an international sensation that will cause Scope stocks to soar!  Then again, maybe not.

Referral Reward Program: Tell a Friend About Webtivity Marketing & Design
Brand Promotion – How Do You Do It?
5 Ways to Build Online Credibility
10 Things to Know About Online Reputation Management